THIS GAME IS A SMALL PROTOTYPE.

it was first made many many months ago. i just remembered about it and decided to publish it as i do not see myself going back to work on it any further.

explore the cities of a small country in your spaceship.

arrow keys to move when in the over-world

I really like this prototype and see it having a ton of potential. I feel like 8-bit graphics are very underrated and typically put to best use in representing the actual substance it accompanies; the text - story, characters, and world still largely left to interpretation by the audience's imagination. It's like a visual novel, but in an active 'less is more' landscape, which I appreciate and find more value in being able to paint something in my own head with just enough help as to understand the writer's true vision (This prototype didn't have sound, but in the same regard I would recommend at least a bit of audio to simulate "zzzzit", or however that alien spoke, because I didn't have a clue how that could've sounded in my head. Atari audiobites wouldn't be exact, but it can at least distinguish without a preface to the dialogue how the alien is actually supposed to sound (High pitched? Clicks in between? Even I can't fully illustrate what I mean through mere description, so the audience misses out on more of the narrative's atmostphere - text can only accomplish so much, which is why these graphics are so effective in drawing accurate replications of the writer's vision, while still maintaining the audiences unique sense of freedom with 8-bit media to color in the less imperative blanks themselves). I doubt you need to be told this much, but I feel it's worth putting into words nevertheless.

Anyways, I'd like to see more. Reminds me of old sci-fi novels like Frank Herbert's DUNE, especially through environment descriptions. It truly does make the world more vivid and lived in.

thank you for taking a look at the game! its been quite some time since anyone has, haha. I do agree with sound. I had used a browser "program" to make the game, and did not have the tools to implement audio bites. while i may or may not delve into sci-fi narrative games in the near future, i do hope that you stick around for news on a possible demo that my friends and I are currently working on. thanks again for playing DUSKWATCH!

Awesome, I'll be happy to see how your demo turns out! 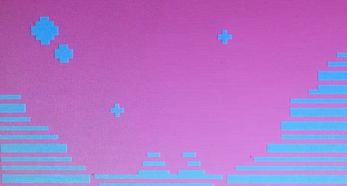